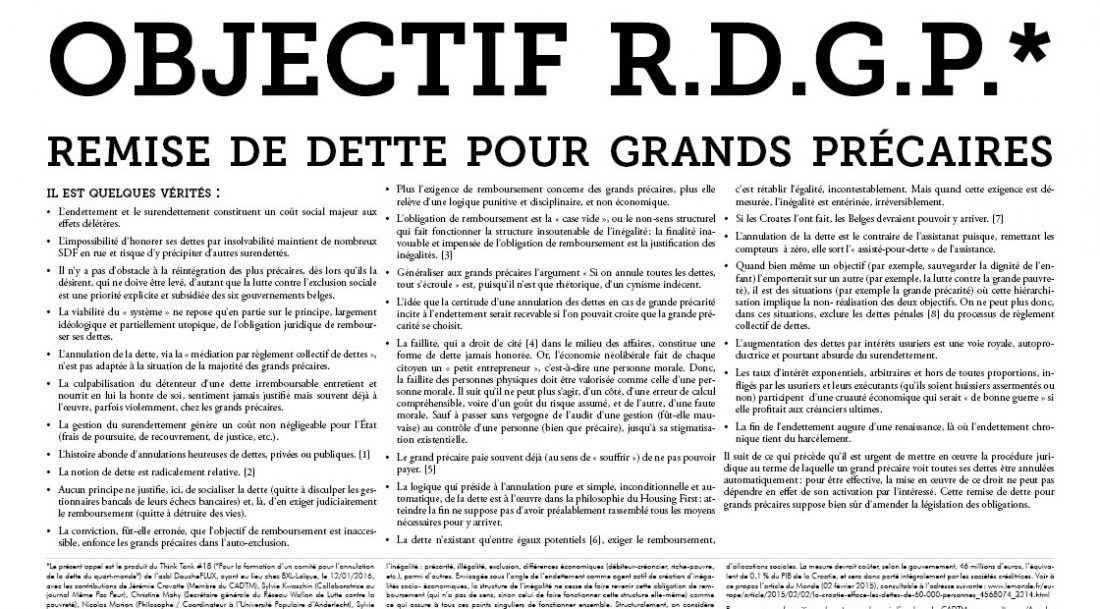 Debt Forgiveness for the Very Poor

The appeal set out below is a result of Think Tank #18 (For the setting-up of a Committee for the Cancellation of the Debt of the Destitute) which was hosted by BXL-Laïque on 12 January 2016, with contributions from:

It was drafted by Laurent d’Ursel and Nicolas Marion.

The aim is to bring the issue to the attention of all political parties.

If you would like to sign the appeal, to give it added weight and impetus, and contribute to the debt forgiveness movement, please sign the form!

The time has come to spell out a few home truths:

It follows from the above that there is an urgent need to introduce a legal process whereby destitute people have all their debts automatically cancelled: to be effective, this right cannot depend on the destitute person taking the initiative. The cancellation of the debts of destitute people will, of course, require legislative changes.

[2] A debt is only perceived, suffered, experienced as a debt if it can be produced in the form of an accounting document, however rudimentary it may be. All accounts are just wordplay, theatre, narratives, which only make sense if you agree on the rules, the scene-setting, the presentation of the narrative. But the rules can always be changed, the scene moved, the presentation adapted. Indeed, there is nothing more arbitrary than the determination of the moment when it is considered that I am not liable to someone (in the sense of a legally enforceable debt) for what I really do owe him. Very quickly, we stop counting – fortunately, because you could spend your whole life doing it!  – what we have allowed and what we could legitimately transform into so many debts.

[3] The structural non sequitur is determined as that which moves sense between the singular points of a given structure. In this case, there are a number of singularities in the structure of inequality: insecurity, illegality, exclusion, economic differences (debtor-creditor, rich-poor, etc.), etc. Seen from the point of view of debt as an active agent in the creation of socio-economic inequality, the structure of inequality continuously brings us back to this obligation to repay your debts (which makes no sense, other than to make the structure itself work) as the thing which enables all these singular points to work together. Structurally, it is often thought that it is this nonsense itself which enables the structure to change, to collapse, to adapt. Suspending this obligation (morally, economically, politically and culturally) offers, to thought at least and in practice to the destitute, the possibility of envisaging a reconfiguration of the active structure of social, economic and cultural inequality.

[4] In the United States ­(in other words, in tomorrow’s Belgium), this established fixture is practically a requirement if you want to be considered legitimate, authentic and reliable.

[6] David Graeber, Dette. 5000 ans d’histoire, Paris, Les Liens qui libèrent, 2013, p.147 : “So, what is a debt? A debt is something very specific, and it arises in very specific situations. First, it requires a relationship between two persons who do not consider themselves to be fundamentally different, who are at least potentially equal parties, who are real equals in the really important respects, and who are not currently on an equal footing – but for whom it is possible to restore equilibirum.”

[7] In February 2015 the Croatian Government announced a plan to cancel the debts of no less than 60,000 destitute people. This measure concerned 60,000 people with an income of less than 1,250 kuna (€162) a month and a debt of less than 35,000 kuna (€4,550). It will only be available to people who have no savings and do not own any property, and priority will be given to those who are already receiving welfare benefits. The Government estimates the cost of the measure to be 46 million euros, the equivalent of 0.1% of Croatia’s GDP. The cost will be borne entirely by the creditor companies. See the article in Le Monde (2 February 2015), available at http://www.lemonde.fr/europe/article/2015/02/02/la-croatie-efface-les-dettes-de-60-000-personnes_4568074_3214.html
See also the critical analysis of this example by CADTM : http://www.cadtm.org/Annulation-de-dette-en-Croatie

[8] According to Article 1675/13, § 3, there are four cases in which the employment tribunal cannot order the cancellation of debt capital:

• Compensation awarded in respect of physical injury resulting from an offence must be paid in full. Thus the debtor must pay the compensation in full, even if it takes more than 5 years.

• Remaining debts in case of bankruptcy, except where the bankruptcy proceedings have been closed pursuant to the Loi du 18 avril 1851 sur les faillites, banqueroutes et sursis de paiement. Such debts cannot be cancelled if the debtor was convicted of irregular or fraudulent bankruptcy.

• Fines (Article 464/1, §8 alinéa 5 of the Code d’instruction criminelle: “The cancellation or reduction of sentences under a collective inslvency procedure or a civil seizure procedure can be granted only in application of Articles 110 and 111 of the Constitution». In force since 18/4/2014.)