Hot or cold weather, dry or wet… Everyone likes to begin the day with a shower as a fresh start. Everyone. That means homeless people too. Thanks to DoucheFLUX’s substantial shower facilities, a few dozen people can start every day with a clean body and a better self-image.

What is a shower voucher?

A shower voucher entitles the holder to a free shower at DoucheFLUX.

Shower vouchers can be bought by any citizen at a Point of sale for €5. This covers all costs incurred by DoucheFLUX for one shower. The shower voucher is then given to homeless and/or destitute people, either directly by the purchaser, or by a Distribution point– a public, medical, cultural, citizens’… organisation – that has partnered with the Point of sale.

The Point of sale of the shower voucher

By selling the shore voucher, your establishment incurs no extra costs but you position yourself as socially engaged, and concerned about the problem of extreme poverty in Brussels.

The Point of sale becomes an ambassador for the shower voucher and receives therefore communication materials (poster, flyer).

Some of your clients already know a homeless and/or destitute person? Perfect! They can take the shower voucher and give it to the person in question. Others might feel less comfortable handing a voucher to a homeless and/or destitute person, maybe because they are not familiar with extreme poverty, or because they are afraid of stigmatising someone – “if I offer you a voucher for a shower, it’s because you look dirty!” … That’s where the Distribution point comes in…

The Distribution point of the shower voucher 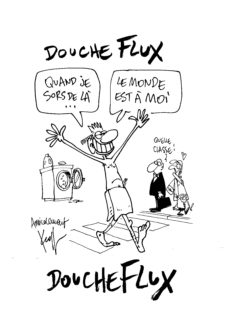 The Distribution point an organisation that works with homeless people, is active in the fight against extreme poverty in Brussels, or any other public, medical, cultural, citizens’… organisation in Brussels, that deals with people living in poverty. This organisation works as a intermediary between the purchasers and the recipient of the shower voucher.

To become a Point of sale or a Distribution point?

Download the more extended présentation of the initiative in English, French or Dutch and contact us by mail or telephone 0486 666 928.

Link to the shower voucher page on this web site.