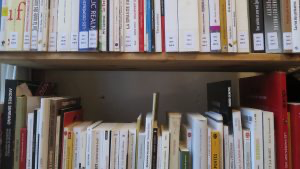 DoucheFLUX hopes to develop this project by forming a network with other documentation centres with which it can cooperate and exchange information and resources. Partnerships are established with other networks, notably the Webdoctes network, which brings together RESOdoc, the documentation centre of the university health promotion service at the Institute of Health and Society, Université catholoque de Louvain (UCL/IRSS-RESO), CEDS, Culture&Santé, Nadja, Parthages and DoucheFLUX.